Naima Khan talks to Stephen Unwin and O-T Fagbenle about faddish theatre and crazy people who change the world.

Director Stephen Unwin appears to have a thing for books in his rehearsal room. There are scripts and hardbacks dotted around the upstairs space at the Arcola. There’s also a big, brown chesterfield and a noose.

“This play was a phenomenon when we did it in ’87.” he says, “but it’s not been done here since then. It is a play which a new generation should see and I think it’s right that these brilliant 20th century plays are getting looked at freshly but theatre is terribly faddish let’s remember.”

The Conquest of the South Pole, a sees a group of unemployed young men holed up in an attic re-enacting Norwegian explorer Roald Amundsen’s 1911 expedition which arrived at the pole just over a month before Robert Scott’s British team.

Theatre’s faddish nature aside, Stephen has his own political as well as artistic reasons for his revival and they go beyond his immediately apparent love of Karge. “One of the things Karge says is that unemployed lads are verbally inventive, creative creatures with massive brains, massive hearts and massive guts. They’re not saints and they’re not geniuses but they’re full of life. And what we get in this country at the moment is rocketing youth unemployment and – as we saw with the overwhelming attitude to the riots – the idea that young people are evil or bored or stupid and it’s bollocks. It’s simply not good enough as a way of thinking about human beings.”

More familiar plays about the working class in dire straits tend to give them a coherence, a unity that comes with a common enemy. “This” says Stephen of Karge’s play “is about a working class which is not working, which is fragmenting in all kinds of scary ways but still struggling against the bastards” 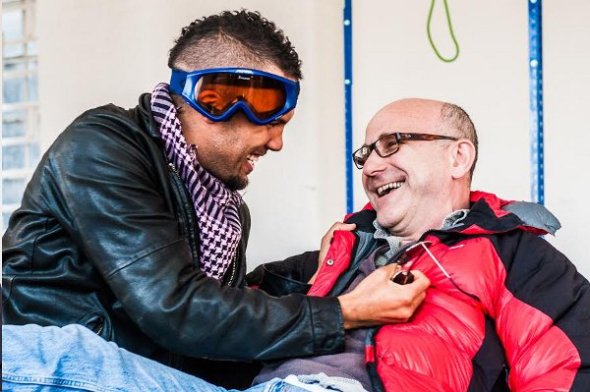 “Like any good play,” he continues, “it’s an antidote to journalism -sorry, I know that’s your trade – but it’s an antidote to simplifications, to terms that journalists like, like NEET” (Not in education, employment or training). “It’s not ideal, it’s not an idealistic play, it shows the dangers, it shows the cracks, it shows the tension. There are moments when these guys are harming each other and there are moments when they come together. There’s betrayal and damage and danger, it’s politically incorrect in that way.”

This interaction between Karge’s characters is one of the most remarkable elements of The Conquest of the South Pole and at this point in our conversation, O-T Fagbenle who plays Slupianek in this production points out why his character helps set this play apart.

“He’s got a strong sense of his own individuality,” he says. “There’s a saying that only crazy people change the world because sane people change themselves around the world. But crazy people expect the world to change around them. Slupianek is one of the crazy people. I don’t know what brought about his mindset but the big question around this character is how is he going to draw the group together? There are reflections of fascism from this leader who wants to bring everyone with him and he will cut out anything that stands in his way.”

“He’s got real personality, charisma, drive and ability to speak” chimes in Stephen -they’ve entered one hell of a flow and are soon finishing off each other’s sentences – “and that’s amazing,” he continues “but leadership is also a nightmare and the play looks at both of those. Brecht would say, there’s a contradiction here. You’ve got to break eggs to make an omelette but look at the disaster of breaking those eggs, look at the violence required. This is a complicated understanding of social groups.”

“But it’s not moralistic.” continues Stephen “what he challenges an audience to think is: these men may be incorrect in some ways, but they’re correct in others and you can’t sit there above the fray going ‘oh these people are so ghastly’ which is what this government are doing at the moment. Instead, you have to consider how a guy who can be pushy, nearly violent, betray his friends and yet take them to the South Pole and amazingly make us care.”

Images by the wonderful Alex Brenner©