Imagine a world where wudu is sexy. Not the soothing, somewhat impractical habit it can be, but real come hither performance of ritual ablution. I can guess what you’re thinking but it turns out such a feat is indeed possible and they managed to depict it in the recent National Theatre production of Dara, a play exploring the conflict between two of the Mughal empire’s defining leaders: Shah Jahan’s sons Dara Shikoh and his brother Aurangzeb. 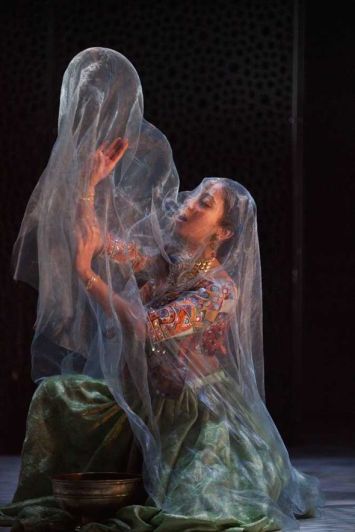 Wudu here is imported into the life of Hindu dancing girl Hira Bai, by her Muslim master. While pouring water up her nose, Prince Aurangzeb’s favourite sassy slave girl takes on a coquettish air, enlivening his measured palace existence and mitigating his tense relationship with his father. To Aurangzeb’s dismay, Hira’s positivity is lost forever when she dies young and he becomes a dogmatic, despotic ruler in her absence. Intent on controlling his family’s vast and varied empire through conservative Islam, he locks himself in an ideological power struggle with his Sufi-inclined brother, Dara.
Originally written in Urdu by multilingual Pakistani writer Shahid Nadeem in 2010, this adaptation by Tanya Ronder has been commissioned by departing artistic director Nicholas Hytner and covers the years 1659-1707 during which time Aurangzeb held power. Does the choice to adapt a play by a fluent English-speaking playwright, rather than commission him to translate it concern you too? Let’s talk about it later. Suffice to say this adaptation could have been an exploratory philosophical freewheeler of a play. Instead, Ronder squeezes its themes into a family saga, binds it in an unconvincing love story and seals it with uncomfortably reductive notions of Islam that come to a head in a crowd-pleasing court room scene.

For director Nadia Fall, who has worked with National Theatre for over ten years, Dara is her biggest production to date. Her previous work includes the 2013 Bush Theatre production of Ayad Akhtar’s Pulitzer Prize-winning Disgraced, which follows Amir, an atheist lawyer living in New York battling with his career prospects, his Muslim background and his loyalties. Like Dara, Akhtar’s play was hailed for its consideration of contemporary headline themes, specifically the discussion on Islamophobia and the identity of Muslim Americans. But while Dara is rooted in its historical setting, it is similarly en vogue in its desire to pit Aurangzeb’s emotionally fuelled enforceable Islam against Dara’s rationally conceived liberal interpretation. It’s another theatrical search for the ever elusive moderate Muslim and it seems the spiritually enlightened Dara model, is what we should all be aiming for.

Critics across the board have lauded the show’s production values and on that point, they’re hard to argue with. The show’s beautifully constructed set by designer Katrina Lindsay is staggering in its grandeur and her eye for opulent costumes with intricate layering and embroidery is remarkable. The music, performed by a live qawali band, is comfortingly atmospheric and Neil Austin’s lighting design expertly illuminates Shah Jahan’s palace, hollows Dara’s prison cell and takes us into Aurangzeb’s troubled hallucinations.

But while the production is alluring to the eye, it’s entirely frustrating to any mind that wants to consider the moral ambiguity that makes up most faith systems, particularly those that are used in the creation of empires. On the surface, small things irritate immediately, like the Anglicised pronunciations of basic Arabic terms. In a production of this magnitude, which unashamedly pats itself on the back for reaching out to British Asian audiences, it’s hard to believe they couldn’t get a dialect coach to double-check every one on stage can get “Ramadhan” out convincingly. I admit I’m still torn about whether this is just quibbling or if my instincts that this is something that should be treated with care are valid. Maybe it only matters to a few people but the depiction of Muslims saying words and phrases like “Bismillah” and “Lailahaillalah” with Lawrence of Arabia-esque distance from such everyday phrases is jarring. These are yet more mainstream depictions of my history that make me feel invisible.

The performances only add to this. Dara, played with regal assuredness by a bearded Zubin Varla, has a presence that seems modelled on filmic depictions of King Richard the Lionheart, while his brother Aurangzeb, a brilliantly unlikeable baddy played by Sargon Yelda, takes after envious Prince John. Unintentional though it may be, the manifestation of these characters on stage smacks of Western royals storming around foreign lands. The Mughals have historically been used to justify the later British rule in the region as the Mughals also arrived uninvited and set up camp for centuries. When, after meeting a spiritual leader who explains life in a few handy metaphors, Dara begins sharing his newfound spiritual understanding, it feels like European proselytising even if, like me, you agree with almost everything he says. While his philosophies are technically Eastern and centuries old, under Fall’s direction they are delivered in a recognisably Anglicised way.

Ronder’s script doesn’t help. She presents us almost immediately with the hackneyed old image of a Muslim drinking alcohol to exemplify all that is contradictory and confusing in the practices of Islam and the behaviour of its followers. In 2015, it feels patronising and repetitive when the drinking challenge is posed not only to Dara’s younger brother Murad in a functional move used to explain that his grandfather, Jehangir, had a relaxed take on religious observance; but also to Aurangzeb by Hira in a test of his love for her. For South Asian audiences, especially majority Muslim audiences such as the ones Nadeem’s original would have been performed to, the knowledge that many Muslims drink is nothing new, nor is it that contradictory. For some it’s a vice albeit a serious one, for others, it has become an accepted, if secretive, norm. In Britain however, it’s still a reliable old trope that the majority of audience members seem to accept. It’s time we called for a more sophisticated depiction of the relationship between faith and conviction.

Add to this the excessive discussion – mostly by men – on the questionable necessity of hijab and one begins to suspect this adaptation exists solely to explain the National’s centre-left take on multiculturalism. It may have been necessary for the prophet’s wives, says Dara, but it is tied to a time and a culture that doesn’t exist anymore, he insists. Awkwardly, he uses the word “hijab” which wasn’t common term in Dara’s time nor a common practice in his father’s vast empire which would have included Persian, East Asian and South Asian interpretations of the head covering. None of which would have looked anything like the contemporary Arabised hijab worn by myself and countless others in Britain today. Like much of the discussion on Islamic practices in Ronder’s adaptation, talk of hijab here is unhelpfully oversimplified. Nothing of individual agency or political relevance or the combination of religion and patriarchy is addressed. For a British audience to gain something beyond an introduction to the subject, I’d argue these aspects are essential to the theme. Without proper consideration of them, I’m tempted to use the O-word. But I’ll hold off for now.

I hesitate to completely pan the show because the family element is handled with complexity although it is overused in many ways. In flashback scenes, we see Aurangzeb’s relationship with his father break down spectacularly when Shah Jahan chooses to believe an apple conjuring Faqir over his son. Scantily clad, and eschewing all mainstream notions of what it is to be a Muslim, the Faqir turns up at the palace and reluctantly reveals, at Shah Jahan’s insistence, that Aurangzeb will eventually facilitate his father’s downfall. In a fit of rage Shah Jahan almost drowns his son and Aurangzeb is considered a suspicious adversary from that moment on. What that does to his notions of power, loyalty and supremacy are key to the familial ties explored in his relationship with Dara.

Similarly, Dara’s sister Jahanara (Nathalie Armin) has a curious co-dependent relationship with Shah Jahan who is simultaneously abusive and loving towards her. Her sister Roshanara (Anneika Rose) is a sprightly, engaging rebel whose sense of self-determination is miles ahead of Jahanara’s. Each is loyal to one brother and their understanding of themselves as Muslim women and social leaders is cleverly teased out. But in this wordy play, we don’t get a full picture of Aurangzeb’s working mind. He isn’t really allowed to show himself as a strategist, employing Islam to preserve the family power that Dara appears to take for granted. Instead his fear of Dara’s inclusive, optimistic Islam is explained as a deep seated emotional trauma from his childhood coupled with a broken heart.

The play also skirts over the abuse of religion to satisfy ego, of which both Aurangzeb and the more popular Dara could be accused. Rather, the text focuses on an overly defined good Islam vs. bad Islam showdown in the key court room scene where Dara must defend himself against charges of apostasy. Dara believes all spirituality, including Islam, is useful to the soul and the land but also that it should not be forced into something tribal. He sees it as a path to understanding intangible divinity and the solid earth around him. His Islam is far beyond a set of enforceable rules. He makes his poetic case to a group of bumbling mullahs who appear to be imported from modern day Iran and a prosecutor (Prasana Puwanarajah) whose infantile arguments are intentionally laughable. So when Dara asks “Who cares which door you open to come into the light?” they mock him but are noticeably dumbfounded.

Dara’s discovery and expression of a less distinctly visible Islam, one that’s more palatable to British audiences in these dark times, could be interrogated to great theatrical effect. But alas, here it is padded out with lacklustre fables about a dehydrated king giving up his kingdom for a sip of water. Watching this kindergarten explanation unfold in a court of lumbering religious traditionalists, is what convinces me the O-word is called for here. What else could a Western view of stupid, yes-men clerics and optimistic objectors be but Orientalist? The idea that Aurangzeb cannot think for himself and remains cocooned in his past is Orientalist. The image of Dara gaining relevance only in his rebellion is Orientalist. The excessive, male-dominated discussion on hijab and the fascination with Muslims who drink is Orientalist. Sexy wudu is definitely Orientalist! And it makes me wonder whether this production of Dara isn’t one of the most successful examples of 21st century cultural imperialism in contemporary British theatre.

With this in mind, I feel we should question the need for a British writer to pen a new version of a play by a fluent English-speaking playwright like Shahid Nadeem. Given what a great opportunity the development of this production has been, it feels more relevant to ask what a Pakistani playwright would like to convey to a British audience about our intrinsically linked history, than to ask a white British playwright what she would like to convey to British audiences about a figure like Dara. In a recent panel discussion called “The Global and the Local in the Arts: Translating Pakistan’s vibrant cultures,” this idea of cultural imperialism was posed by an audience member to Nadeem himself. “The best thing” he replied “would maybe be to stage the play in the original Urdu with surtitles.” I wonder if National Theatre would consider this such an impossible task. At what point can we stop expressing our gratitude to mainstream powerhouses for engaging with “international” theatre on a basic level and start demanding that they play their part in its evolution?