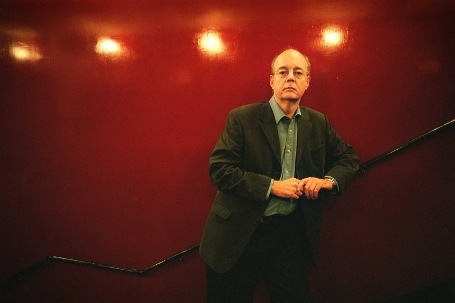 David Edgar and I are sitting on a worn-out sofa in the spacious hallway of an even more worn-out Church. St Leonards’ in Shoreditch is small but feels vast. It’s an uncomplicated space but in its empty state, as we find it this afternoon, it’s intimidating. It makes a perfect setting for the Charm Offensive revival of David’s 1994 play, Pentecost, where the set is as much part of the production as the characters.

Complicated is right. The art at the centre of Pentecost is a fresco on the wall of an unidentified Eastern European church where a group of hostages are being held. Their captors soon realise that the art they’re also unwittingly holding hostage, might be worth more than the people.

Adding another layer of complexity, David refuses to allow the captors to be out and out baddies. “What my gang of refugees are doing,” he explains, “is obviously bad. But to use the same term that you’d use for driving a plane into a building and killing thousands of people? That seems to be wrong to me”. He’s talking about more that scale here. He’s looking at intent and motivation.  “Terrorism is a way of describing forms of military action” he continues, “but we tend not to associate terrorism with what states do”

It’s a tactic, not an ideology, which might be easier to explore. Technically, if not culturally, being against terrorism is about about being against a method, one which stirs up a range of reactions, like the art it is used against in Pentecost.

“I wanted everyone to have a different attitude to this painting” says David of the fresco which depicts Christ. “The orthodox Christians say ‘oh it’s a symbol of our great national character’ while the Catholics say ‘oh it’s about universal western values’. Essentially, everyone wants a slice of the painting to suit their ideology and they also want to own it commercially. They want to be the ones to charge people to see it and to be proud of it.”

The varying ideas about commercialism and ownership in art reflect other issues of diversity of opinion explored in Pentecost. It’s a play which speaks to any community dealing with the complexities of multiculturalism and varying notions of progress (and the theatre community is certainly one of them). It discusses a renaissance painting but takes inspiration from the early ’90s, a time of violent change in Europe, as well as the enlightenment era, a period when the focus of life shifted from God to man leading to a scientific revolution and the spread of democracy.

“When I was writing this,” explains David “Europe became this great centre of enlightenment values again. The Berlin wall was coming down but as a character says in the play, new walls were going up. There’s a kind of hypocrisy in the West’s ideas of universalism which is what provoked the idea of the play and why I placed it around a renaissance painting”

“Without the enlightenment period”, he continues,  “we’d be sitting in the dark. But it was limited, particularly in its attitude to the rest of the world. It was an exclusiveness posing as universalism. I think the enlightenment said ‘this is the way that everybody’s got to live, we’ve now cracked it, it’s scientific, it’s rational, it’s democratic, it’s economic.  Yes, it’s not always equal but that’s the way everything should be’”

“But” argues David “diversity is coming to terms with the idea that it’s not always clear what being progressive means.”

The example he gives draws on his own formative years when, as he puts it, “it was very clear what being progressive meant. You were against war, you were against having nuclear weapons, you were certainly against the Vietnam war, you were in favour of forms of emancipation and liberation which seemed very obvious and clear. You were in favour of women’s rights, a freer attitude to sex, people dressing how they liked etc. It was a very easy package. But that becomes much more complicated when you’re living in a multicultural society.”

Similarly with art, culture and academia you find progress can come in a certain package. “There is for example, a feminist art history, as there is a feminist military history, as there is feminist literature study,” says David “there’s a post-modernist this and a leftist that. Those divisions park themselves on certain subjects enabling you to say ‘Oh I see, that’s the feminist line on this’.

“In my play I look at the conflict of  art restoration: whether or not you should intervene, fix them, clean them, move them – with frescos especially – there are all these issues.”

The crux of Pentecost lies in David’s parting statement: “We need to try and see the world through fresh eyes and one of the things that makes that difficult is that everybody tries to appropriate works of art to their own ends.”