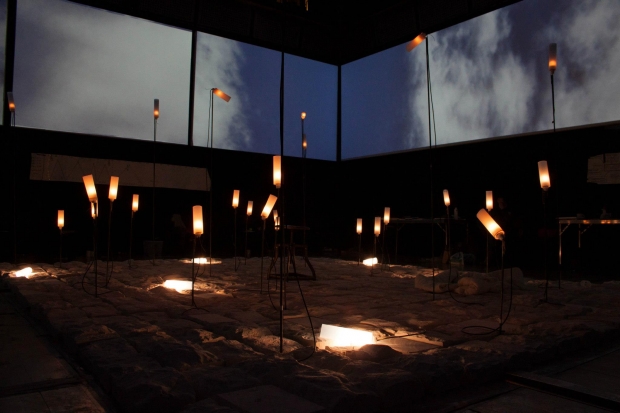 If you’re going to mess with a person’s pupils, expect their eyes to get tired.

Fevered Sleep’s installation for Above Me The Wide Blue Sky is a set that never stops. Lamps stretch up from the gaps between ice-white, uneven paving stones in the middle of a room surrounded by moving images of the sky. In the centre of it all is a sleeping Whippet with that emaciated, lost look his breed usually has. For the next 45 minutes, performer Laura Cubitt points out the diverse nature of what lies beneath this sky, making it easy for us to see the interconnectedness of it all. But the company miss a crucial point: that to appreciate our wider connections across the world, haven’t we got to start with some introspection?

This manifests itself in the language which is detached from any one person or perspective. It generally picks up on the things that are everyday, describing them with matter of fact words but an appreciative tone. A dead robin, children playing, trees, gardens and oceans all feature in this soothing and sweetly meditative piece. But although what’s said is full of beauty it is devoid of wit and importantly, personality, the thing that causes us to make connections in the first place.

While some will see this as a rare opportunity for calm and contemplation after battling the commuters at Waterloo station, I don’t think the company need 45 minutes to make their point. In part because the lighting can easily send you to sleep like our Whippet friend.

The lights grow brighter and dimmer, our eyes constantly adjusting to them, and all the while the text persists with its open telescope on the world beneath the wide sky. It makes me wonder what it would take for someone to ever see it as a narrow sky. A massive unfathomable thing just for them.

However, there is a thin layer of something more to this show. Towards the end Laura revisits some of the first images she raised in our consciousness but talks about them as if they’re gone. It’s comparable to Tim Etchell’s Sight is the Sense that Dying People Tend to Lose First. Though his piece, performed by Jim Fletcher, had more laid-back charisma and opinion, Above Me the Wide Blue Sky hits more strategically at the idea of things, no matter how banal, slipping away. But it lacks the introspection needed for its wide contemplative nature.

Above Me The Wide Blue Sky, a Fevered Sleep/ Young Vic co-production runs at the Young Vic until 28th March 2013