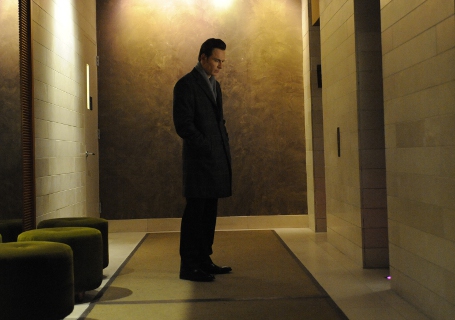 Sex addiction is the subject at hand here and the shame of it doesn’t bear down so much on society as it does on Michael Fassbender’s Brandon Sullivan. An indistinct city slicker, Brandon’s work computer is full of porn as is his laptop, every shelf in his house and probably every obnoxiously square cushion in his blank, leather clad apartment. What director Steve McQueen has created in this character’s cramped but desolate life recklessly treads a line between brilliant and banal. For some, his style here will crystallise Shame as a moment of cinematic revelation for its blatancy and others will see it as a paint-by-numbers for the endless amount of filmmakers who seek to capture the times.

McQueen introduces us to Brandon when his sister comes to stay and her presence seems to push him to his limit. Sissy, played with frighteningly waifish fragility by Carey Mulligan is almost incomprehensibly vulnerable and regularly frustrating, but fittingly so. The existence of such a free and capable adult who is pathetically unwilling to get her ducks in her a row is – like so much of Shame – beyond disconcerting and uncomfortably real. Love her or hate her, Mulligan is completely on form here, it’s a shame she doesn’t get more screen time. Sissy’s presence hints at the disturbed past she shares with Brandon and her morally and sexually wayward ways (implied incest, naturally) provoke her brother to compare his own unconquerable desire for self satisfaction to her all-encompassing neediness.

But as much as McQueen and his co-writer Abi Morgan try to steer clear of judging Brandon, they inevitably make judgments (as good writers and directors do) on their subject, the notion of sexual attraction in a contemporary, cosmopolitan setting. Their film shows Brandon seeking out every physical and virtual opportunity for sex but it also demonstrates how sex seems to follow Brandon.

Unfortunately, McQueen tackles this moral struggle with addiction with a heavy hand that patronises and bores the audience. When Brandon is persistently eyed-up on the subway by a married woman, McQueen demonstrates how attraction stops being a compliment and instead becomes something selfish. But miles away from the sophistication of Hunger, he insists on repetitive, unnecessary close-ups of her wedding ring as she leers at him. Similarly, when Sissy performs an innocent jazz rendition of New York, New York she predictably evokes tears from her brother’s cold, dead eyes which I’m assuming is meant to be heart-warming on some level. It’s not.

Sadly, the boredom isn’t momentary. As Fassender goes about New York shagging anyone he deems worthy, Harry Escott’s music turns sex into an epic event. Lots and lots of epic events. At first it’s utterly brilliant and completely mesmerising but it soon loses its motif status and becomes dull. However, the film does redeem itself with moments of perfection when Brandon is in his most desperate state and becomes scary, heady and gripping all at once.

The characters are compelling, the cinematography a crude mix of overwhelming and condescending, while the acting is pretty faultless. It’s a shame that McQueen leaves his audience so bored for so long, but take this as art above entertainment and Shame becomes something quite fascinating.

Shame opens in cinemas in the UK on January 13th.

One thought on “Shame by Steve McQueen”