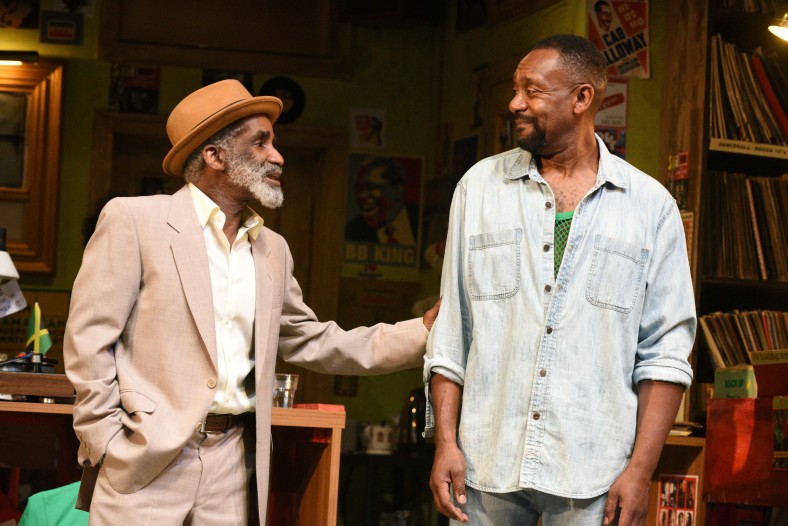 This stage adaptation of Danny Robins’ Radio 4 drama is a feel-good show packed with snappy one-liners from a gaggle of intelligently drawn characters. Its roots in radio are evident, to be sure: the action develops significantly at 30-minute intervals with as many jokes crammed in as possible. On the upside, the story of a failing record store and its feckless owner comes with a host of infectious tunes and a seductively atmospheric score. The writing even careers through some keen observations about the emotional consequences of social mobility, happily staying light-hearted all the while.

The joy of the piece resides largely in musical director Joseph Roberts’ selection of tracks, with relevance not just to the West Indian community from which protagonist Rudy (Larrington Walker) springs but to anyone who remembers a time when people were willing to pay for music. Libby Watson’s set is so packed wth album art and mementos that it could be a gallery installation all its own, and it pays tribute to an era when music devotees sifted through shelves of vinyl and took chances on new artists. Fittingly, the script, co-written by Robins and Lenny Henry (who also stars), laments the modern-day business models – sample line: “How are we supposed to compete with Amazon and iTunes” – without getting bogged down by politics.

Walker’s Jamaican shopkeeper Rudy Sharpe is at crisis point. Developers want to buy up his Birmingham property, he’s up to his eyes in debt, and relations with his son Adam (Henry, pictured right with Walker) are shamefully acrimonious. His life consists of flirting with laundrette owner Doreen (Lorna Gayle), playing darts with long-time chum Clifton (Jeffery Kissoon), and ignoring his bills – despite Adam’s warnings. At times, the characters border on cliché, but the cheerful banter leaves the audience grinning from ear-to-ear and observational humour riffs on such disparate topics as golf, iPhones, and the popularity of media studies.

Rudy’s misplaced nostalgia, too, is reliably to the point: “I remember the days when we were the ones who were persecuted,” he says, complaining about the more recent immigrant communities. Adam, the so-called “croissant muncher”, is the butt of jokes about middle-class habits as we come to learn that Rudy feels abandoned by his socially aspirational son. (Adam has a son of his own, played by YouTube phenomenon Joivan Wade.)

Under the direction of Paulette Randall, who shepherded Henry’s triumphant turn in Fences to the West End, the play’s turning point comes after Rudy claims Ziggy Marley will play at the store and get him out of debt. Ziggy’s a no-show but the concert goes ahead complete with an onstage band and the community rallying round – singing, dancing, and selling t-shirts to raise money. The result makes for a zinger of a gig in the second half, with the cast performing a string of crowd-pleasing hits including Desmond Dekker’s “Israelites”, “Here I Am Baby” by Al Brown, and “Living on the Frontline” by Eddy Grant. By the end, everyone lives happily ever after and the audience is left with a stellar soundtrack to hunt down. I, alas, will probably just download it.