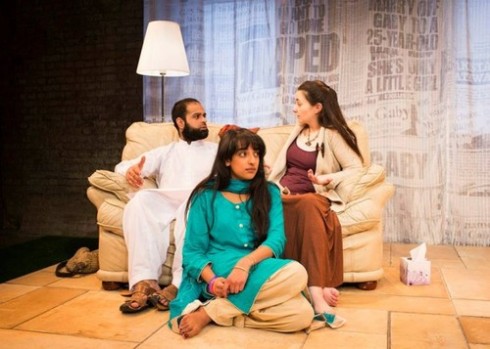 Naima: Today we’re look at some upcoming arts events and we’ll begin with Tamasha Theatre’s latest production, My Name Is…, a verbatim theatre show inspired by the case of Misbah Rana aka Molly Campbell, the Pakistani-Scottish girl who went missing in 2006. Her disappearance sparked an international police search amid fears that she’d been abducted by her father and may be forced into marriage in Pakistan. The meda, as you might remember, went into overdrive and reported events as they unfolded and more details about the girl, whom they called Molly, came to light.

The legality of the case was put to rest when Misbah’s white Scottish mother dropped her claim to custody. But a moral question mark still hangs over the incident:did Misbah run away? Was she abducted? Was she co-opted into the Pakistani culture that her mother had rejected. or was she returning to the culture she was raised in?

Today we’re joined by playwright Sudha Bhuchar who is also co-artistic director of Tamasha Theatre. Thanks Sudha for joining us. Can you tell us Sudha what made you want to delve deeper behind into this story?

Sudha: I read an article by Cathy Scott-Clark and Adrian Levy who mentioned what was really the story of the girl’s parents, how they met in the ’80s and fell in love and crossed boundaries to make a life and a family for themselves. I got very interested in the personal angle of it. So then, the journalists, Adrian and Cathy very kindly shared their research with me and I managed to make contact with the family and got interviews with all three of them: the daughter and the father in Pakistan and the mother in Stornoway. So that’s what kind of drew me to the story.

Naima: And the play you’ve created, My Name Is…, is a verbatim play so it’s made up of the interviews you conducted with the family. And you’ve changed their names. Misbah is now Ghazalah or Gaby. How did you pitch it to them? Can you tell us about the way you explained your idea and the research process that followed which of course involved this family that had already been through so much media interference?

Sudha: The thing is, when I first met them, I had no idea how I was gong to do it. But I met them and they were very generous and open and honest. They had been through a lot, as you say, but they were also keen to talk about it from a more rounded perspective. At that point, I didn’t know how I was going to write the play, what form it would take, whether it would be a fictional piece based on their story, and in fact it’s taken me so long, this was 2008. That’s partly because I felt this real responsibility to tell a REAL story. And although I’d started writing it in a more fictional way, I kept coming back to them in their own voices.

When I transcribed the interviews I ended up with over 130 pages, the play itself is very much edited but you know, they also speak to each others interviews. So I have used an imaginative process as well in terms of editing and putting the material together.

Naima: So what made you settle on this format? The verbatim form

Sudha: Well yeah, I was grappling with what to do with it, and I kept being drawn back to it [verbatim form] and then I would leave it and try something else. But I kept coming back to it the more I started to love this insightful, personal story. So to try and come up with made up dialogue from my own imagination didn’t feel right and actually, there’s a real poetry in the kind of rhythm of the speech, the regional accents and the girl being in and our of Urdu. It just felt like that was part of the story: the growing dialect and the way people are speaking these days.

Naima: And on the whole story, your script does such a fantastic job of giving insight into Suzy, the character based on Misbah’s mother. You look really carefully at Suzy’s formative years, why was it important to ask those questions about her?

Sudha: Well I was very moved by a white Scottish teenager with a very fractured family background and who left home at 16 and felt that she would be changing herself and her life so that she could have a family of her own. And she went into it with innocence and a real drive to get it right.

Naima: Did anyone else ask about this, in terms of journalists and the people originally reporting the story or reflecting on it afterwards?

Sudha: Well in fact, that was what was so great about Adrian and Cathy’s article, the one which drew me to this. Because they did go back to the parents and when they met.

Naima: And just to say to our listeners, we’ve posted a link to Adrian and Cathy’s article on our Facebook page, so do have a read of it there.

Sudha: Oh good because that was the first one that really looked behind the headlines at how the family were. You know, there was 15 years of marriage there and four children, they really did try to make it work.

Naima: About making it work, throughout the play, we see two people, Misbah’s mother and father, who come from different races and cultures, they came together in the ’80s. How do you think things have changed for interracial couples today, if at all?

Sudha: I think it’s important to remember that this is one personal story and every experience for interracial couples is personal and different. I think what it does show is that there are more challenges when people are adapting and the things you face are kind of character building. But we also know from the changing demographics that there are a lot more mixed race, mixed religion relationships and marriages and the number of mixed race children is increasing.

Naima: Did you find, having spoken to them about their relationship, that Misbah’s mother and father had changed their minds about relationships between people of different cultures, after what they’ve been through?

Sudha: They knew, in a way. People did say to them, ‘Do you know what you’re getting into?’ I think it’s more about people accepting that they made their choices and this is how this particular story ended up. It’s not necessarily going to be the same for everyone.

Naima: Before you go, I wanted to ask about one of the more minor characters in your play, Sana who, I assume is based on one of Misbah’s younger sisters.

Sudha: Yes, she’s her half sister.

Naima: And we hear Sana reciting the Kalima and it’s clear that she’s really little and really cute. She’s really intriguing too because we hear her voice crop up a few times and the characters is refer to her and talk to her at times although she’s not there on stage.

Sudha: For me, when you do verbatim work, I find it really good to include the texture of the environment. So when I want talking to Misbah and her father, her two little half sisters were always round and so I just felt, in terms of the texture, that we could show, without really going into it, that there is a new family there and a very affectionate relationship with her and her half sisters. When you’re doing verbatim and you’ve only got three actors in the cast, the question is how do you conjure up the rest of the world. So there are moments that Suzy hears the children coming back from school and they make references to things that are going on outside the window and they have cats. I found these connections that I didn’t know about. Both Gaby and Suzy have cats that they haven’t named. There’s something that still connects them, however small it may seem.

Naima: And the play is on at the Arcola Theatre in Dalston from 30th April to 24th May