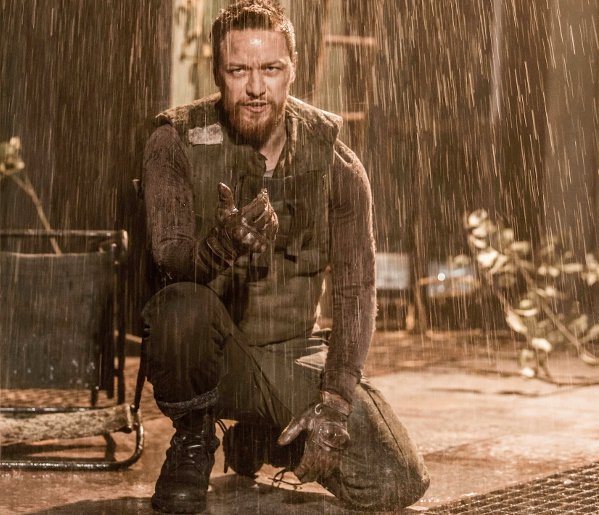 As if you ever doubted it, I can confirm James McAvoy makes a near perfect Macbeth. He storms the stage as an underground fighter, close with the king, closer with his fellow fighters and closer still – for a few precious moments – with his conspirator wife. Earning respect and adoration from the highest leader to the lowliest servant, his transformation from admired soldier to power-hungry killer is rueful but not enraging. There is from the outset a disconnect between his mesmerising performance and parts of Jamie Lloyd’s production at the newly transformed Trafalgar Studio 1.

Lloyd’s ideas are many in number, steely in passion and fierce in conviction, but they don’t flow one into the other. He bats them about, reminding us minute by minute of all the different things going on here, and in doing so, dilutes the overall emotion of what should be a gut-wrenching play fired by a gut-wrenching central performance.

He’s at his best when he depicts the reverence that Macbeth enjoys from his supporters. That mentality is key to the brand of revolution that Lloyd’s dystopian Scotland is enduring. Here, the witches emerge from sewers and the digital age is destroyed. Everyone clings to the hope Macbeth offers after Duncan’s death and Shakespeare’s way of mitigating bad news becomes piercingly clear. The ripple effect of Macbeth’s actions stare plainly at us, most pointedly when Lady MacDuff is abandoned by her husband.

This is aided in part, by the addition of 70 audience seats within the stage space. When MacDuff flees to England, a confused land of democratic protest and mixed loyalties, he leaves his wife and children to the merciless hands of Macbeth. So just after Lady MacDuff tells her daughter that she has no father, we get to watch a group of us sitting behind them, observing their collateral murder.

Similarly, the sweet but difficult relationship between Claire Foy’s Lady Macbeth and her husband, highlights a personal focus. They emphasise the mournful remembrance of their lost child, hinting at her depression and propensity for mental illness. Together they make the physicality of their scenes that much more delicate. But Foy fails to command the stage in her scene and her limp hair and costumes don’t help.

The costumes here are an example of how for each moment of brilliance, there are as many moments that fall completely flat, which makes for a very inconsistent production. At one point, McAvoy appears to be in jeggings. Equally, while the set design conjures a flawless, grimy, dank and desperate existence; the sound and light design are over the top. Scotland is broken, we don’t need flickering lights to tell us that. And does the difference between England and Scotland really need to be spelt out with placards?

The most obvious failure though, is the attempt to marry two battling ideas. These are the individualist power trips that McAvoy depicts so well and Lloyd’s ideas on the band of brothers who back each other and betray each other in violent revolution.
Macbeth runs at Trafalgar Studios until 27th April 2013