No central, desperate question holds this play together, but it is pretty production. 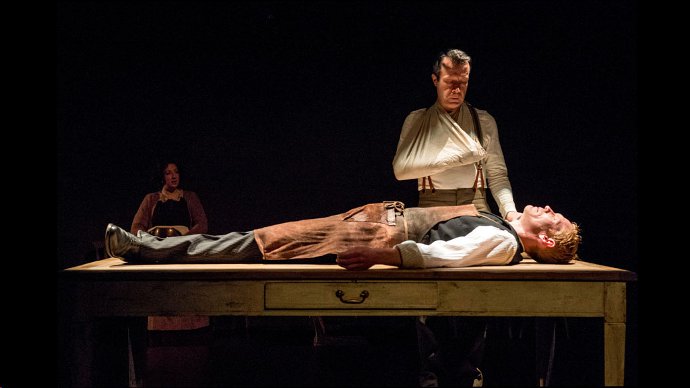 While there’s not a lot of meat to this play, Table is a beautifully structured and immensely watchable family sagas. It’s crafted as well as the furniture at its centre with a large group of surprisingly strong characters, perfect sound design and a simple set almost painted with light. But it struggles to sew its primal thread through the entire play and so loses the strength of the idea at its heart.

The idea being that traumas are passed on from generation to generation and that we, like the table, bear the scars left by those who raised us. It begins with the workaholic table-maker David Best (Michael Schaeffer) and sees us through to his great great great granddaughter, the exuberantly confident Su-Lin (Sophie Wu). But the notion of intergenerational emotional trauma, is at its strongest with David’s great grandson Gideon (Su-Lin’s grandfather if you’re keeping up).

It’s his mother whose life we get to see most of, which is in a way a shame as Daniel Cerqueira’s performance as her cheeky twin brother makes me desperate to find out what happened to him. But it is his sister Sarah who takes their mother’s religiosity to an African convent where she has a close encounter with a leopard and then the hunter who shoots it. Then it’s her son Gideon who is dragged from Africa to a commune and then thrown out into the wilds of Norwich in the ’70s for university.

Late in the play, we eventually get to see the showdown between Gideon and his ex who unpack some of what we’ve seen neatly tucked into his history. But it’s not enough to really give us something to chew on and things are wrapped up too neatly.

Table hasn’t really decided why it’s looking at what it’s looking at. There are interesting themes but no central, desperate question that it really opens anything up. Perhaps Gideon’s relationship with his mother, his wife and his child are enough to get a discussion going, but then the rest of the play is unfairly overlooked.

But the mix of its simple idea and saga-like structure make Table the kind of play that allows an audience to either forget about their own world and get sucked into someone else’s, or spend hours relating every snapshot of David’s progeny to their own existence. It is an engaging people-play, if not a great one.