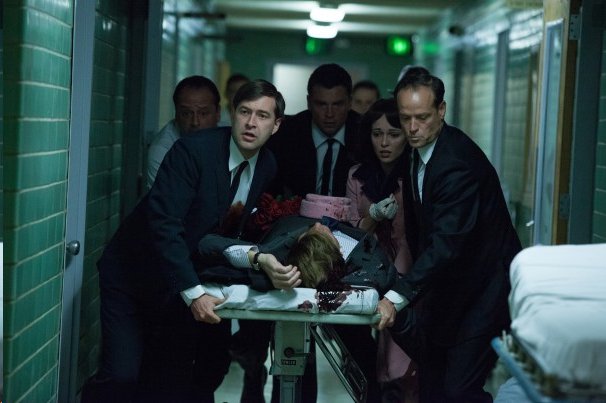 Rather than drumming up any dramatic tension over a storyline, director Peter Landesman uses Parkland to focus in on reactions of people immediately involved with the events following Kennedy’s assassination in ’63.

Paul Giamatti plays an ordinary citizen who happens to have caught the entire thing on film. Billy Bob Thornton is the secret service agent trying to get the film developed while Zac Efron is the doctor who takes initial responsibility for Kennedy when he’s rolled into Parkland Hospital. Smallville’s Tom Welling crops up as a blood-spattered bodyguard, Ron Livingston is a Kennedy-loving policeman with a insinuating file on his desk and David Harbour is his furious boss. Austin Nichols plays another secret service agent high on adrenaline, only he’s responsible for Lyndon Johnson.

Lee Harvey Oswald’s brother Robert is our main link to the Oswald family and their response to Oswald’s arrest and grief over his death. His kooky mother is the comic relief but amidst all the confusion and grown men crying, there’s not a lot to smile about.

The idea of following the stories of a few individuals as they soak in the events isn’t a bad one. We get to see not just the Oswalds but a glimpse of how they were treated. Landesman also shows us the different ways Kennedy’s death affected the men in his life and the men responsible for his life. It’s a nice meditation on human nature but it is very thin with not much added to what we already understand about the time and the people involved. A widow mourns, a bodyguard feels like a failure and a citizen is forced to deal with the ruthless press hunting for sensational images. Also, if you’ve watched any TV in the last ten years, the cast will probably be a huge distraction. Still, anyone with memories of this era might be able to get something from this sentimental take on it.

Parkland is released in UK cinemas on 22nd November 2013.