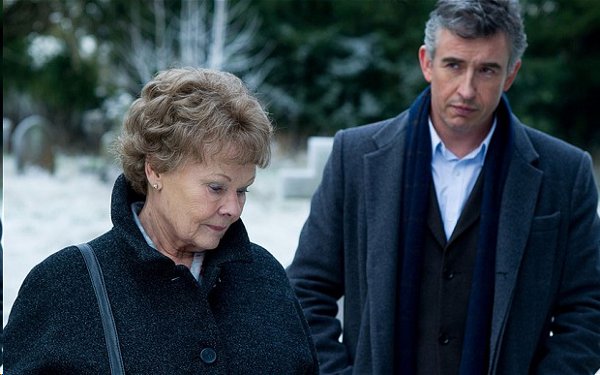 If old people talking about sex gets you giggling, then yeah, Philomena is as funny as it is tear-jerking. Without an appreciation for Judi Dench in occasional razor-sharp granny mode, you’re left with Steve Coogan as the slightly misanthropic journalist Martin Sixsmith for laughs. He delivers but his character, a hack trying to keep his head above water with a human interest story, is more of a vehicle than a destination.

Sixsmith takes Philomena (Dench) from Ireland to America to trace the whereabouts of the son she was forced to give up when she got pregnant as a teenager in the ’50s. Over half a century later the convent that sold her child still claim they have no clue where he is. Records have been burnt, most of the nuns responsible are now dead and Philomena relies on Sixsmith, his contacts and the internet to get some closure.

Her story is about finally getting beyond her village and wrapping her head around the life her son, Anthony, had without her. She fixates on whether he had any recollections of Ireland, any connection to his birth land or his mother, which is torturous for audiences and Sixsmith alike. The kid left Ireland when he was three, how could he possibly remember? But this based-on-a-true-story film directed by Stephen Frears, is only silver screen-worthy because of that unlikely, everlasting connection Anthony has to his homeland. It’s what makes this film such a heart-warming weepy, as is the paradoxical, movie montage that builds up of Anthony and his mum.

At the core though is the gentle but sharp confrontation between Philomena and Sixsmith. While she’s forgiven the Church and the individuals involved and remains a Church-going Catholic, Sixsmith comes at his story eager to expose the heartlessness with which such a powerful religious body operated. As both Sixsmith and his subject go back and forth over whether they want the story published at all, while a stiff editor gives curt instructions down the phone, the big question is about where human interest stories come from. If they come from a place of hate or loathing, are they really as progressive as they might claim to be? From Philomena’s stance, as presented in this film, we can move on better if we’re prepared to start from a good, perhaps forgiving, place.

It all sounds a bit sickly sweet. It’s not. Judi Dench gives depth and thoughtfulness to a character that could so easily be portrayed as a naïve, doddering old lady, brainwashed by her Catholic upbringing. Steve Coogan keeps his secular character brilliantly English and seeing him taken down by Philomena’s no-nonsense approach is fun. But the provocative nature of looking back at such atrocities will always throw up far more questions about the Church, its past and how to move on, than this kind of film will ever satisfy.