Written for Spoonfed in November 2013:

We’ve brought actress Ingrid Oliver to the Wellcome Collection on Euston Road in the hope that surrounding her with science might get her to give us a few clues about the scientist she’ll be playing in the Doctor Who 50th Anniversary episode (airs 23rd November). Alas, she’s been sworn to secrecy but does hint that one particular exhibit, a gargantuan work about the emotional and psychological manifestations of obesity, looks a lot like an alien that may or may not pose a threat to mankind.

When we do sit down to talk, she takes out her phone and admits, in a moment of brilliant honesty, that she’s looking up what she’s allowed to say. The more we talk, the more I realise how difficult this interview is going to be to write up. If I just transcribe what she’s saying, how on earth do I get across how tongue-in-cheek she is?  Every comment she makes comes with a funny footnote, every answer comes with a warning about how actor-y she might sound. There’s a clear balance of self-awareness, humour and thoughtfulness to her conversation and a phrase soon follows both of us around the chat: “at the risk of sounding pretentious.” It’s hard to talk about acting and “being in another world” or “accessing another thought process” without sounding like a tool. Refreshingly, Ingrid knows that.

Usually one half of the comedy duo Watson & Oliver, Ingrid, the daughter of two entrepreneurs, has been moving steadily into more diverse radio and TV roles including turns in The Penny Dreadfuls, Doc Martin and Peep Show. This year’s big project is the Doctor Who 50th Anniversary episode which was filmed in 3D and will be screened in cinemas.

Doctor Who is her first experience filming in 3D and a stark change from getting through three or four sketches in a day with seemingly endless costume changes on Watson & Oliver. “The camera is literally three times the size” she says about the 3D process. “It was so big and so in my face that all I could see was my own reflection in the lens, which is hard when you’re trying to-” we both take a second to acknowledge the potential pretentiousness of the impending phrase- “access this other world.”

Doctor Who is a particularly odd world to try and access. “The first day on set,” she says, “I had to run away from a monster and that was weird because I was thinking bizarrely: OK, if I was actually running away from a monster, how would I react? That’s just – I’ve got no reference point for that, there’s no actual experience I can draw on! Thankfully, the monster costume was genuinely terrifying so it wasn’t as hard as I thought. The people they get to play the aliens and monsters are brilliant. They’re experts in movement and stunts so they know exactly how to create something frightening.” 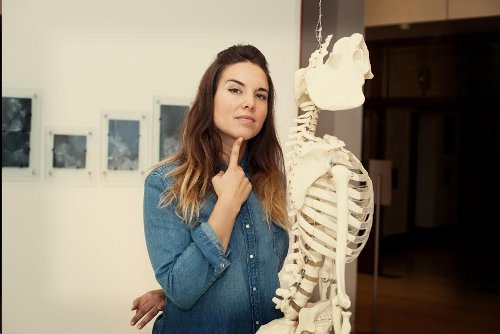 The filming took place in Cardiff where, I imagine there was a lot of sitting around in trailers. “Yeah, there was,” she says, “but I genuinely love filming, it’s such good fun, you get to talk to so many people. As actors we just get to swan around chatting to each other, chatting to the make-up artists, it’s lovely. They’re working of course so we’re probably just getting in their way. And when there are amazing actors like Matt [Smith] on set, you do just want to stand quietly and watch them at work.”

This has probably been one of the most energised conversations I’ve had with an actor and the best thing about Ingrid is her unashamed love for TV and it’s not just because everyone’s excited about programmes like Broadchurch and The Killing. TV informs her work as a comedy writer but also her broader work. “TV makes me aware of genres. I’m still amazed when I meet actors or writers or directors who don’t watch TV. I get that everybody’s different and it can depend on your upbringing but for me, TV helps me understand how audiences experience those styles. If someone were to cast me in a Poirotfor example– which by the way I’d love to do” she leans in closer to the Dictaphone, “someone cast me in a Poirot pleeeease –  I think I’m too late though, they’ve already filmed the final four, shit!  But my point is, watching so much TV growing up made me aware of how audiences can view things in genres and styles.”

Before we wrap up the interview, as a brilliantly weird example of how that sense of genres has worked in her favour, Ingrid tells me about her audition for Doctor Who. “I knew it was the part of a scientist so I borrowed my boyfriend’s glasses. He’s not into science or anything, he’s just a bloke who wears glasses – this is such a ridiculous thing to have done! –They’re quite thick, NHS reading glasses and I wore them in the audition claiming that I needed them to read, which I didn’t. In fact, I couldn’t see a thing in those glasses but I’d learnt the script off by heart and hey, looks like it worked.”