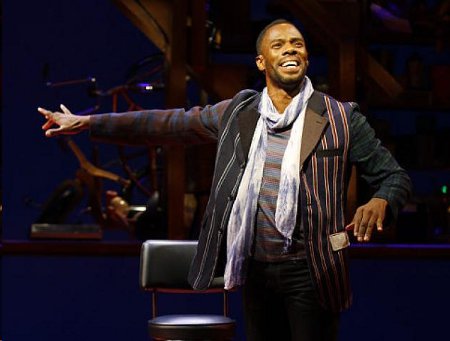 “I made these for you!” says Colman Domingo holding up a plate of store bought Hobnobs. On a stiflingly hot day, he is chilled out and cheerful in shorts and a vest, sporting a massive grin and a huge laugh that undoes any intimidation you might feel as you approach his 6’2” frame. For the most part this actor/playwright has had a career that’s kept him Stateside where where the second show of his creation, Wild With Happy finished its run in California at the end of June.

I’m at Tricycle Theatre to talk to him about his autobiographical show A Boy and His Soul, which charts the most significant moments of his life growing up in West Philadelphia in the ’70s and ’80s, pairing them with the most significant music of that time. As the conversation moves from director Titas Halder to his parents in their old age and the joy of discovering his drag queen cousin, Cypherdine, there emerges a pattern to the way Colman delivers his answers. He starts with a big hearty laugh, incredibly excited that he’s just been asked about what ever it is and then offers a thoughtful, heartfelt answer, measured in tone and centred on the essence of the people he talks about. This conversation feel much like his play, giddy with excitement but unpacking something deeply ingrained. By his own admission, “it’s a passionate, sugary sweet sort of play but it’s also funny, and a little dirty.”

You only just arrived in the UK, have you met Titas Halder who’ll be directing the show?
We met for the first time like twenty minutes ago. He seems to understand this play so organically, and the passion around the soul music. He said ‘I want to give you everything you need so you can tell the story you want to tell’, that’s how I knew he was the right director for me. He seems to have a great integrity. This show isn’t about the bells and whistles or moving the set around dramatically and he gets that. And he’s very kind! Immediately, you know, I can feel already that we’re establishing a bond, that we’re going to become great friends.

The show feels like its about the culture of one generation seeping into the next….
Yes! It really is about the passing of one generation on to the next and finding yourself in the middle. It’s why I didn’t called it A Man and His Soul but A Boy And His Soul because I felt like I was having a second coming of age. It deals with the transitions of neighbourhood, your parents, their illnesses, mortality and really that stepping into manhood.

Were your parent your main musical influence?
My parents loved music! There were thousands of album in the basement and back then you could buy it easily and cheaply and you kept it. That was the culture, you kept it, you looked over the liner notes and they gave you lens on how to listen to the music. The characters in the play and the music sort of mirror each other. My sister, I sort of draw her as a character that is as big and as bold as Donna Summer’s Bad Girl, she has a lot of the attitude of that song.

Can I ask you about Cypherdine? How did your parents’ generation talk about him?
Oh My God, Cypherdine! How did they talk about him? They didn’t. My cousin Cypherdine was a pioneer in his generation. He was bucking the system and truly being himself. He was a 6′ 3” erm….I wouldn’t even call him a drag queen….what ever his drag was doing, it was just an expression of himself. He wasn’t just always in women’s clothes, male, female, you never knew what he was going for but he was just his own creation.

When I asked my mother about him, I was like, “his name’s Cypherdine?” because I didn’t even know what that was and there’s a point in the play where I’m told: oh yeah that’s your cousin Jeffrey but he calls himself Cypherdine, so then I was even more confused. I didn’t know you could just call yourself something. But you know, he was never shunned away, he was always at family events but he was just taken at a certain level. It was always like: that’s your cousin Cypherdine, Hi, how you doing Cypherdine? But that was it and as a child I was just filled with so many questions like what IS that? And why do I never get much information about him? It’s always swept under the rug. But then there’s a scene in the play when I see Cypherdine in a club and I find out more about his erm, let’s say, unruly background.

Would things have changed if you’d known more about him?
Honestly, I really wish I had more of a connection to that but there was a disconnect, people like Cypherdine weren’t allowed to be our mentors. They were always pushed off into the corners of society. I think we could be even more progressive if we had that mentorship or even if we just saw, if we could just see what a gay relationship looked like, if we could see something to look towards. But I didn’t know, I didn’t know what my life could be or what it could look like.