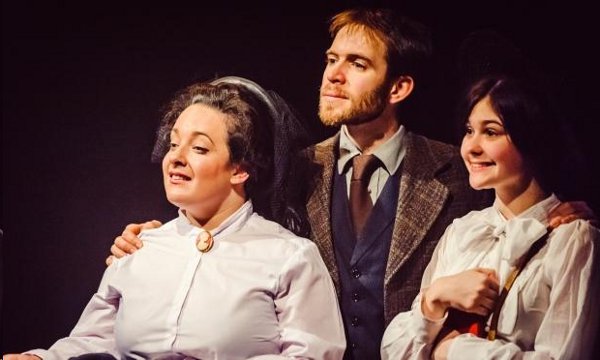 Despite my shoddy googling before going to see The Hatpin at Blue Elephant Theatre,  I failed to realise why The Hatpin is called The Hatpin. So finding out at the end via Emma White’s moving solo left an unshakeable after-taste, the kind a musical about murder should leave.

Emma plays Clara Makin, daughter of baby farmers Charles and Agatha Makin who take in the illegitimate children of single women and charge them for the care which inevitably, they don’t deliver. Her character is a good example of everything that’s right and wrong with this Lazarus Theatre production. Clara is intentionally underdeveloped, stifled and mocked by her murderous mother. She is 16 but behaves like a 12 year-old which is simultaneously intriguing and really irritating. Her physical performance here is spot on, she creates an eerie character who knows far more than anyone else and as such becomes something horribly creepy.

Similarly, Kate Playdon as Agatha Makin is hilariously arch and contributes to some welcomed momentary changes in tone. But the lines given to these characters in James Millar’s 2008 book do them few favours. It’s a very classic, lazy look at villains from 1879 that would have had much more impact if Millar approached them through more consciously contemporary eyes.

Sadly his neglect of the characters in this respect doesn’t let up so the depiction of the whole appalling affair is limited by the original text. Were director Ricky Dukes to take a less faithful hand to it, we might have something more sophisticated. But his deft approach does challenge the claggy, overly traditional text.

His use of space is near perfect, the movement is also engaging and clever and he’s got some outstanding solo singers in his cast. Particularly Eleanor Sandars as Harriet Piper, best friend of Amber Murray, the most vocal mother willing to challenge the Makins in court. Sandars voice is clear and well-projected and she sings with conviction. But it’s during the harmonies that things get a little too shrill. A degree of sharp panic is appropriate for this show but there’s often a lack of control and clarity when it comes to the sound and sometimes it feels like the voices are competing with the music.

Still, Lazarus do bring out the disturbing nature of this musical to great effect and leave me unnerved. But it’s a shame this feeling isn’t succinctly manipulated throughout.