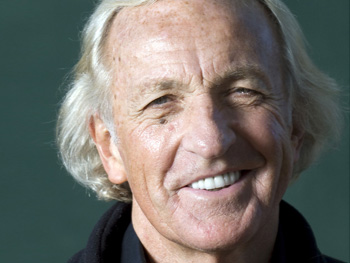 It is genius to put John Pilger in conversation with a BBC reporter. Tonight at Queen Elizabeth Hall it’s Robin Denselow who is leading the discussion as part of London Lit Fest. Deneslow reports for Newsnight and BBC African Service and does a bunch of freelance work including reviewing world music for The Guardian. He is good lefty company, still very much a part of organisations that Pilger criticises so freely and his presence doesn’t hinder the discussion that streams forth about the history, current state and future of journalism. To listen to the whole discussion, click here. If you don’t have 1hour and 8 mins, read my crudely condensed but hopefully useful notes below.

The evening begins with a short video compilation of some of Pilger’s documentaries from 1970-2007 and the septuagenarian gives the voice of his 32 year-old self a fleeting but pensive glance as clips of his reports from Vietnam, Cambodia and East Timor play behind him. His most striking broadcasts are his illegal reports and a few of his boo-yah moments come when he’s pitted against unintelligent, authoritarian voices who show none of the detailed understanding of global politics that he does. They provide some comic relief and it’s an easy way to lionise St John but he’s given us good reason to.

Despite its aim to celebrate his work, there is a sad tone to the reel and part of that is down to the all too familiar pattern of broadcast journalism. The same shots of framed family photos that play while an off-screen parent talks about a dead child are from decades ago. But not much has changed in the formulaic presentation of war, death and destruction which begs the question: have we become numb to this?

Pilger talks about this succinctly, he calls for a different approach to journalism, one that is not lead by party politics (“you cannot be beholden to a state without being an extension of it”), and he says progress will require “a seismic change.”

He draws our attention to the images of brutal irony that act as distraction in both his clips and the ones that run across our screens today. In his report from Cambodia, he kneels near a gutter surrounded by the crumpled banknotes that were swept across the city after the Khmer Rouge blew up the national bank having forbidden an form of currency in the country. It’s poignant  but Pilger reminds us not to rely on such images for a complete understanding, they are not the measure of a good report.

He goes on to talk about being made a major in the US army solely for the purposes of access during the Vietnam war. The access allowed him to report on government and military mistakes and strategies but he highlights the need to ask why and he questions our use of embedded journalism today.

He asserts that a reporter should be someone people trust and someone who has experiences as well as ideas and noting the rise of opinion-based celebrity journalists, he says firmly, “I don’t like the idea of journalism morphing into one long column.”

Such columns are editor decisions and he links those to our use of embedded journalism and talks about granting access to information, as we do with embedded journalism, as a state of mind. He reminds us to question it at every level of journalism, especially the decisions made by editors, who are often  guilty of “rampant censorship by omission.”

He cites the media’s representation of the Iraq invasion of 2003 as an example and calls it a shame on journalism because so little was challenged. The way the public handled information about our actions in Iraq revealed to me, our dependency on broadcast journalism.

A lot of time is spent discussing Julian Assange who Pilger calls “heroic” and Wikileaks, which he says has shamed journalism by alerting us to what journalists should be uncovering. He also lauds it for giving higher (deserved) status to whitsleblowers. Assange’s “treatment in the media”, he says “is a stain on journalism” and he reminds us that the most bitter take on Assange has come from what used to be respectful media outlets.

Talk turns to the Leveson inquiry and what it’s doing to the perception of journalism and the relationship between journalism and the British government . He says Murdoch is being thrown out of the club to make it look like something has changed. But he simultaneously hammers home the idea that journalists and editors should never underestimate the public. “Media is a subject in itself now” he says, “media stories are news stories so let’s not underestimate public knowledge of the media, especially young people”

He does however feel that the usefulness of user generated content (UCG) like twitter is over “utterly exaggerated”, he questions how much it helps us makes sense of things and his response to UGC  units on newsdesks is simply “Oh, what fun!”

When asked about journalism schools, he says they produce “job fodder.” They teach students how to be journalists of a certain kind who produce a narrow form of journalism based on the idea that sources come from above not below.

But he remains optimistic, that new/emerging journalists will navigate through the systems in place and understand them better. That, coupled with the increase of whistle blowers and their status he says“we are in a fortunate era.”

His last warning is about “the most potent force in media” which is how he chooses to describe PR – the term coined by Edward Bernays of Woodrow  Wilson’s government, who believed that manipulation was necessary in society. Public relations is the most obvious and most accepted example of guidance from above.

When it comes to the Q&A, most people who pipe up are just plain irritating but the best question Pilger is asked all night is “What happened to protest?” He blames poorly structured unions and explains that they’ve created their own elites and points out their connections with the labour party under Blair and says that they took away structure to street protest.

He finishes by saying that this is a time for extraordinary transition and urges us to take inspiration from Latin America, to be aware of our country’s “psychopathic” foreign and domestic policies and the fact that protest in this country has been criminalised.

Much Kudos goes to Robin Deneslow for guiding the discussion which was as broad as it was rich and that’s hella rare.