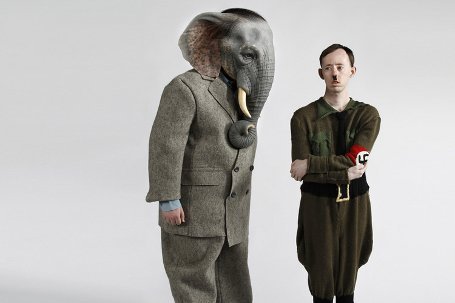 By their own definition, Back to Back Theatre “create theatre with people who are perceived to have a disability”. They play with some of the crueller sides of humanity in their show Ganesh versus The Third Reich. But as they go about demonstrating doubt, disillusion and painfully fierce conflict, they bizarrely and quite brilliantly manage to keep me smiling for most of their imperfect show.

The key to their success is communicating when the joke’s over and Back to Back are experts at creating that shift that occurs when we have to stop laughing and start asking questions. For me, their brilliance is in their blatancy and if you know what a ‘gulab jamun’ is you’re in for a few extra special treats.

They begin with Mark, who’s being coaxed into playing a Jew in Brian’s play which sees the Hindu deity Ganesh make his way through ’40s Germany to reclaim the swastika for India. Humanity, Brian’s script exaggerates, is at stake. But Mark has problems speaking clearly so it’s useful that Simon, the coaxer, goes about his task with yes or no questions “do YOU want to be a JEW?” he asks slowly and surely. “Yeah” comes the nonchalant reply.

But Simon Laherty, Mark Deans, Brian Tilley and Scott Price are all volunteering themselves to be  deemed “intellectually challenged” as their director David points out, by simply being in a Back to Back show. And that gets Scott questioning loudly and relentlessly whether they are the right people for the job. Does Mark really understand the difference between fiction and reality? Does it matter that Simon knows nothing about Jewish people? And is it ok for a bunch of Australian white guys who are neither Hindus, nor Jews nor Germans to be the ones sending a sweet-toothed Ganesh off to face Hitler?

Complex, fascinating and determined already, the company add another layer of poignancy when in the opening moment of their show, Ganesh meets a Nazi who is fascinated by abnormality and Simon’s character is saved from a gas chamber to be experimented on.

As they reveal the process of arguments that occur behind the scenes, Ganesh versus The Third Reich questions not just the ethics of story telling but where the story begins and ends as it seeps into the rehearsal room. And this is where the humour comes in. In keeping themselves in check these performers say the most explicit things. Scott is as frank as you like about his cast mates and David rebuts his accusations with equal and increasing aggressiveness. Together they chart the complex communications and misunderstandings that occur under such pressure which is made particularly explicit when you have a character like Mark. “Did he just say ‘Get fucked, Scott?’” David has to clarify. Yeah, he did.

When David becomes increasingly heady on power and revels in his theatrical clichés, you also wonder, what makes him the right man for the job? This comes into question in a deeply haunting final scene that sees Mark seal the show with his own vulnerability in a moment that demonstrates the cold-blooded edge in us all. I feel like I’ll be talking about this show for years.