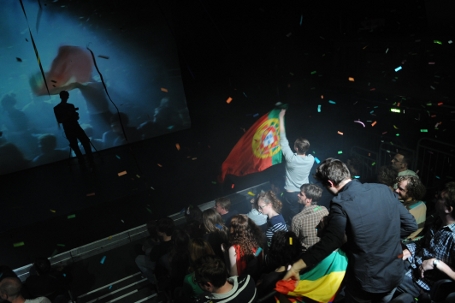 Ontroerend Goed’s Audience straddles a line between immersive performance and social experimentation. This company and in turn this show, stimulates a lot of debate, discussion and refreshingly, the proper use of arts journalism. But it’s also the kind of show that a traditional review would ruin, so excuse the lack of details in this attempt at a critique.

Audience feeds a discussion on the form of theatre, the place of theatre, the ethics and power of the art form and its direct consequences beyond the stage in a funny, frightening point-by-point demonstration of how theatre works, and, more importantly, how it could work. But after just under an hour of this brazen examination, I’m left feeling they could have gone further.

Ontroerend Goed turn the audience into the main feature of their show by first making us acutely aware of our status as an audience. They manipulate it, then challenge it fiercely, but as much as things begin in a sharp and consistently surprising manner that sees everyone prick up their ears and widen their eyes, things do peter out.

In a similar vein to their one-on-one show Internal, Ontroerend Goed see no reason to respect the audience, or at least that’s how they make us feel. But here we are a collective and our behaviour is highlighted as such. It could be compared to An Elegy For Paul Dirac, which you might say treads that line between performance and social experiment without really meaning to. In the Kings of England production the audience are seemingly abandoned for a good twenty minutes with little indication that theatrical conventions will resume. This abandonment tests the mutual respect we assume exists between audiences and theatre makers.

In Audience however, we are put under the lens. It questions the extent to which theatre audiences follow the crowd and at what point we will stand up for an injustice. It looks at what it takes to rectify an unprovoked cruelty when surrounded by others who may or may not be sitting down doing nothing.

But Ontroerend Goed don’t just provoke a reaction, they then examine it. This, as one particularly vocal audience member pointed out, is patronising. It’s also skewed by the people who turn up to the show with an idea of how they want to react should they be provoked. Given the company’s reputation following their previous shows this is now unavoidable. Shows they bring out in the future may be brand new productions, but they won’t be untouched by their creators’ persona.

For me, the fact that Audience might be comfortable in a psychology or a sociology class is the reason it belongs in theatres. Theatre is too often afraid of external influences messing with its forms, something I learnt at Haircuts by Children. As Andy Field pointed out in this excellent article on theatre and Critical Mass movement, theatre rarely compares itself comfortably to other gatherings of the masses. But Ontroerend Goed challenge that in Audience and without meaning to give anything away, they could push our sense of safety in numbers and go even further.