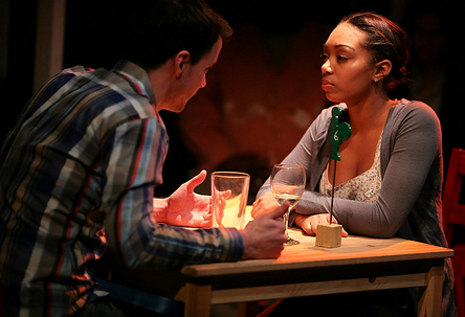 Writer Anders Lustgarten has done what few creators of political theatre have managed. Though inevitably faced with an audience that already agrees with him, he effectively explores both arguments, turns our attention to the bigger picture and dispels the myth that one group’s loss is always a direct result of another’s gain. Coupled with Ryan McBryde’s direction, which hones in on the people at the heart of politics, the two have paired high drama with light humour and created a display of detestable nutcases and lost rationalists in a highly entertaining, provocative production.

A Day at the Racists opens with an array of immigrants singing about sponging off the government to the tune of The Wurzels’ Combine Harvester. Their conviction and enthusiasm, simultaneously hilarious and disturbing, sets the tone. The play is studded with moments of endearing comedy from resonating characters that elucidate the political side of us all and the unavoidable agendas that plague our existence.

White, born to a Pakistani father and Irish Mother, detests both cultures, has changed her name, and is searching for an identity. Believing she’s separating the wheat from the chaff, she selects the patriotic BNP policies she agrees with and disregards the ones that don’t agree with her. With the full support of the party leader, she’s set to change the face of the BNP, give them wider appeal and win them an election. They’re both confused as heck and completely caught up in their own dogma.

Standout acting is provided by Sam Swainsbury whose intense portrayal of Pete’s hard-working, hard-playing son Mark provides heartfelt anguish and genuine hilarity as he jokes his way through everything from dates to leafleting, until faced with his father’s politics.

Though at first glance Lustgarten’s point about Britain’s white working class being overlooked in favour of immigrants seems obvious, the second act soon taps at the part privileged society plays in pitting the lower ranks against each other. Though its valid for political theatre to tackle one layer at a time, it would be good to see a part II that delves a little deeper into this scratched at dimension. Nonetheless, A Day at the Racists is probably one of the best pieces of political theatre you’ll see this year.