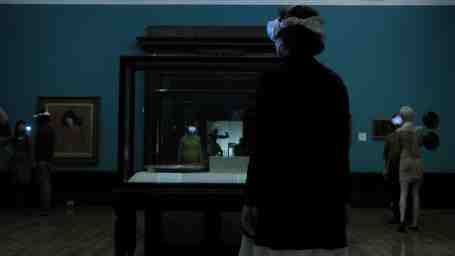 After a few minutes with theatre makers Martina Seitl and Christer Lundahl, it’s clear that they’re asking big questions about existence, presence and how to challenge our perceptions. Einstein, Newton and Bruce Damer (who coined the term Avatar) all pop up in conversation quite frequently, but today they want to tell me about the work of Rupert Sheldrake.

A controversial figure in his field, Sheldrake, Christer tells me, is “an evolutionary biologist who is in a way, on the outskirts, but dealing with ideas on the frontier”. He looks at theories of morphic resonance, which sees organic growth and behaviour as organised not simply by DNA but by a series of fields each with their own inherent memory. “It means,” begins Christer, “that when someone finds a way to crystallise a substance in one part of the world, it may be easier for someone else to do the same thing in another part of the world, without knowing anything about the first person.” This is all to do with theatre, I promise you.

The way Sheldrake thinks is linked to the idea of sensing tension in an empty room after argumentative people have left it. His theories play a large part in the next project Christer and Martina – professionally known as Lundahl & Seitl – are working on.

Lundahl & Seitl are the names behind pioneering, intimate shows like Rotating in a Room of Images at BAC and Symphony of a Missing Room, most recently at Edinburgh Festival Fringe, and Fierce. Their unforgettable multi-disciplinary pieces involve few audience members, a personal audio experience and manipulated imagery and are examples of their avant-garde take on performance. Their ideas on the relationship between science and theatre are just as unconventional as Sheldrake himself.

The two fields are often seen as opposing ways of understanding the world. But rather than falling on to the well-tread path of looking at the human stories behind the science, Lundahl & Seitl look at the human experience highlighted by science. They look at what is is to be present in your body, and what it is to be present in a virtual sense. “I don’t feel too worried if they don’t marry completely,” Martina explains, “but I try to merge them in a way that’s meaningful for me as a creator.”

And working in the arts has less conceptual limits when compared with science: “The science is not something that we rigidly stick with. As artists we have a freedom that scientists don’t. Scientists are equally curious about working together with artists and the collaboration involved. We can take theories and go off in another direction altogether or use them as an underlying layer without trying to investigate them.”

And this is where theatre can come in. Unlike scientists, creators like Lundahl & Seitl have the freedom to draw on the anecdotal, ask further questions, make the most of the storytelling nature of theatre and celebrate the things we don’t know. “There is always one layer which is almost unknown and it’s almost a conscious strategy to allow it to become known, ” says Martina describing her work. “That is the driving force, allowing people to become lost in it.”

The results don’t necessarily look at the straightforward things we can learn from science but at the experiences science has identified as phenomena. Bringing these experiences into theatre triggers more public engagement with these ideas and presents the audience with new experiences, resonant in many aspects of their lives.

Their next show, planned for summer 2012, aims to do just that. It will be an intimate, perhaps individual, show that attempts to simulate the atmosphere of Dramaten, Royal Theatre Stockholm. It’s a building at the foundation of much of Ingmar Bergman’s work, and Christer and Martina are two of the many who have discovered its uniqueness.

“The idea of the project is to have a smaller group of people going through the theatre and in the back technical spaces, and to look into the main stage, gain a perspective but never really enter it,” explains Christer. “We want to create a simulation of that theatre room in another space, but how do you take an atmosphere from one room to another? Can it translate? Maybe on some levels, but it would be transitory.”

This idea for a show requires them to look well beyond our normal perceptions of the qualities and dimensions of a room. Crucially, it will take into account the mode we set ourselves in when we enter a space.

“This building has a big stage near a ten metre-high door,” begins Martina, seeing I need an example to help me understand this. “It’s like a hole into or out of the building. For one performance, this door was left open and the people in the front row could see the snow coming in but they were confused, they didn’t think it was the real world. That says something about gaze and how we perceive things in the theatre.”

The success of their work, for me, lies in their ability to take an esoteric appreciation for things like Dramaten and translate them for the many while maintaining a personal, intimate approach. It’s realised in their desire to see what can happen when we explore the human experience beyond what science and theatre alone can offer.